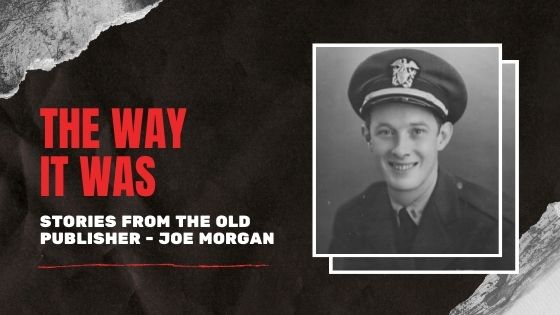 The Way It Was…
“Olivia and the Phantom Aviator”
Joe Morgan
as remembered by the Old Publisher
Originally Published in the Excelsior Springs Standard Friday, August 17, 1979

Every time I see that beautiful lady Olivia de Havilland, on the late late show I can’t help but sheepishly recall how our paths once crossed. Since the statute of limitations has surely run out by now, I guess it can be told at last.

The Aleutians was not exactly where the USO sent their first team. Bob Hope was naturally somewhere where the war really was and outside of Errol Flynn and some acts that needed refining before they hit the big time our entertainment consisted mainly of “Son of Dracula” and post cards from home.

This was especially true of Kiska, that forgotten outpost that even the mail ship forgot half of the time. There’s something about jitterbugging with a buddy who wants to lead too, that’s tough on the old morale.

Cheesecake pictures of Betty Grable are nice, but they’ll never replace a real live woman to talk to…or even admire from afar.

One night back at Adak, we pulled our greens out from under the mattress, shaved and drove four and a half hours over hand-hewn roads just because we’d heard that there was a new nurse at the hospital on the other side of the island. The closest we got was about 40 feet. (that’s afar). She also secretly looked like Marjorie Main, but none of these handicaps in any way diminished the worth of that long trip. Returns will never replace a live show.

Meanwhile, back at boredom isle, Kiska, we drearily listened to “In the Mood” and dreamed of home.

On the other side of the island encamped below an active volcano was the army. Their tents, made out Quonset huts look like mansions. It was kind of a case of “I cried because I had no shrimp cocktails until I saw those cats still eating their spam out of mess kits.” War truly is hell.

They did have one potential link to the world, a small landing strip carved off the top of a mountain. We flew seaplanes out of the harbor so we never used it…nor did we ever see anything use the strip. It just sat there.

Then one memorable gray day returning from a patrol I saw a miracle. A small L-5 liaison plane was actually approaching that lonely strip. In sheer joy laced with boredom I greeted him with a good buzz job. As I got down on the deck I saw more and more people around.

As the plane finally staggered to a halt with all the wind I was creating for them, some parka-clad figures emerged and I gave them a fast hairblowing zoom to welcome them to psycho island.

The rest of the unit started coming in as I landed and I was soon to learn that there is safety in numbers.

Upon breaching, the Crew Chief loudly announced, “Boy is that army colonel on his ear. He’s starting an investigation. Some idiot buzzed the plane bringing Olivia de Havilland in and almost wrecked it. You don’t know who it was, do you?”

If we didn’t do anything else, us airdale types did stick together…especially against army brass. I wasn’t worrying about anybody telling, but I did have a problem. I was considered the resident idiot aviator in our area and this little misdeed was bound to get to my doorstep eventually.“Who me?”

About that time the announcements came through. Olivia, with full army honor guard, was going to visit our hospital. We had a great little hospital, and a fine young doctor, but never any patients.

A light dawned. The Doc was my bridge partner buddy and the last I could do was to provide him with a patient…and just by chance perhaps distract the powers from my aerial activities.

The Doc warmed to the idea, provided a hospital gown and before the entourage arrived I was comfortably settled in as Naval Field Hospital #22’s only patient.

After a quick flurry of introductions and activity the beautiful lady was brought to the bedside of the wounded hero.

“So glad to see you, young man. It’s fine young fellows like yourself that are helping to make our world free. What is your wound?”

With a heartstopping smile and a pat on the head she was gone.

Well the colonel never did get to the bottom of the mystery of the phantom aviator. A signal corps buddy did show me an official photo of the last buzz. It showed Olivia, head down, looking more than a little fearful…the pilot looking slightly bemused and the Colonel even in black and white looking livid and very, very West Point.

Thanks Olivia for the pat on the head. How come I wasn’t smart enough to tell her I had a hurt lip?

Grandpa Joe was born in Excelsior Springs, Mo., in 1920 and graduated from Excelsior Springs High School and moved back from Kansas City, Mo., in 1962. He was publisher of the Town & Country Leader, The Daily Standard and other Leader Publications. He sold the papers and retired in 1986.Here’s how the article looked in a reprint  of the story featured in an Excelsior Springs Museum Phunn newsletter:

The Way It Was – The Cartoonist

The Way It Was – First Solo